The human factor is recognized as one of the biggest challenges in cybersecurity, and creating awareness can be decisive for the prevention of attacks that attempt to exploit it through social engineering. ASCLEPIOS, with the help of Secura, organises periodic workshops focused on improving the general awareness on the security and privacy of healthcare information.

Due to the international travel restrictions linked to the Corona virus pandemic, the second edition of the ASCLEPIOS awareness workshop took place as a completely virtual event on December 3rd 2020.  In the workshop, the participants became familiar with concepts from the domains of privacy and cybersecurity in healthcare, such as GDPR, medical data related risks and threat modeling, as well as with the attacker’s perspective on healthcare settings.

Some of the talks that enjoyed high popularity in the first ASCLEPIOS Awareness workshop (e.g. GDPR or Threat Modeling in healthcare) were kept on the agenda, while on the other hand much more attention has been given to the ASCLEPIOS project itself. The demonstrators of ASCLEPIOS, from the Amsterdam UMC, the Norwegian Centre for e-Health Research, the Charité – Universitätsmedizin Berlin and HTW Berlin, presented the three solutions that have been developed in the context of the ASCLEPIOS project and provided a sneak peek of how modern cryptographic schemes and access policies can be leveraged to enable secure and privacy-preserving access and processing of medical data. 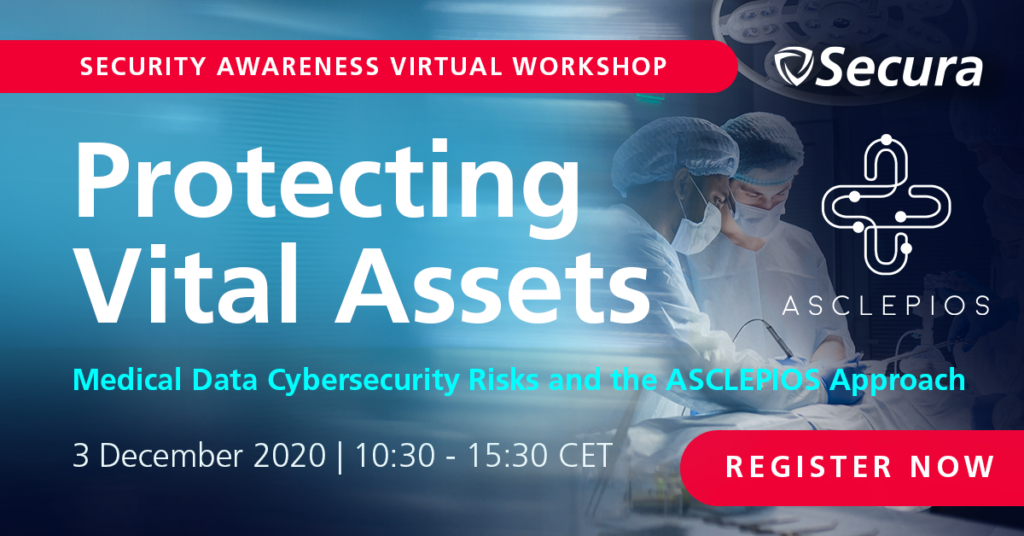 The challenges of going virtual

One of the core values which were initially defined for this series of workshops was to involve the audience as much as possible into the discussed topics. Promoting interaction while maintaining the flow of the workshop can be a challenge in a virtual setting. During the whole duration of the workshop, attendees were encouraged to submit questions through the chat, which have been discussed at the end of each session by the presenters. Additionally, an online feedback form was distributed at the end of the day, in order to collect the views of the audience from the workshop, but also see its educational value. The form was filled by many of the attendees, providing valuable feedback, for which the organizing team is very grateful.

Mostly due to the fact that the event was fully online, the audience was much higher than in the first edition. The workshop gathered more than 80 registrations, with backgrounds including academia, healthcare providers and medical devices manufacturers. Overall, the participants rated the event as well organized, and were happy with the contents and the technical level of the talks. Moreover, all the sessions have been recorded, which allows for further sharing with the involved participants.

While the online event missed the physical interaction of a typical face to face workshop, in general the outcome was positive. The remarks of some participants regarding a preference to slightly more technical presentations (still a minority compared with the general opinion) have been noted as a point of improvement. A slight separation between general and more “technical in-depth” talks in the future editions of the workshop could keep even the most tech-savvy people satisfied, while covering the needs of the general audience.

Currently Secura is considering to organise the next edition of the workshop for May-June 2021, while another final workshop is considered for end of 2021. The current situation and travel restrictions linked to COVID-19 will be constantly observed by ASCLEPIOS, in order to determine if the workshop can be hosted as a physical event, or the same virtual organization will be preferred. While the setting of the second workshop was much different from the first one, the attendance rate and interest in the talks indicated a common topic: healthcare information security and privacy is a hot topic that needs to be understood and treated in a pro-active manner in order to minimize the risk and it all starts with individual awareness. So stay tuned for the next workshops and until then we will keep you busy with upcoming ASCLEPIOS resources on security and privacy in the healthcare!

Asclepios Project · 7 months ago
@Asclepios_H2020
ASCLEPIOS and the @amsterdamumc Stroke Acute Care demonstrator are featured with a full-length article in the June 2022 issue of the Vakblad V&VN Ambulancezorg, the official magazine of the professional ambulance association @VenVN Ambulancezorg https://t.co/juuUIbmpQg https://t.co/Q2fvaqmjd4
View on Twitter

Asclepios Project · 8 months ago
@Asclepios_H2020
The prototype developed by the @amsterdamumc
in #ASCLEPIOS created a new vision for secure #dataexchange during acute stroke care and raised awareness around novel encryption-powered services. Find this and more insights in our blogpost🤓 https://t.co/kgAtM9vjjk https://t.co/7yTr2I3T0r
View on Twitter

Asclepios Project · 9 months ago
@Asclepios_H2020
The results of the #ASCLEPIOS demonstrator by @ehealthNORWAY underpin the relation between clinicians' privacy protection and their willingness to participate in quality improvement activities. Read more in our blogpost https://t.co/kPdjibqSrU https://t.co/mvLxhq6wQB
View on Twitter

Asclepios Project Retweeted · H2020Puzzle
@H2020Puzzle
Join our webinar! ➡️ Tuesday, May 10th at 11 a.m. CET. Validation Contracts Call for #SMEs&MEs and #Cybersecurity providers. Learn more about the PUZZLE framework, who is the call for, how to know if you can enter the contest. https://t.co/C21kYa7md2 https://t.co/wPsNlXeNrR
View on Twitter

Asclepios Project · 9 months ago
@Asclepios_H2020
There is still time to submit your paper to the #specialtrack on the 'Security of e-Health Systems and Connected Medical Devices' #CBMS2022. New submission deadline: 12 May 2022. More information: https://t.co/8BUIpm3YDo https://t.co/pFk7Wiy74p
View on Twitter

Asclepios Project · 10 months ago
@Asclepios_H2020
🍿How does the Feedback on Antibiotic Prescribing Demonstrator by @ehealthNORWAY combine distributed computations and encryption techniques to provide general practitioners with insights and feedback in a privacy-preserving manner? Watch in our video:
https://t.co/LXEQXdv7Qs
View on Twitter
0
1